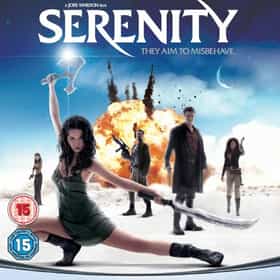 Serenity is a 2005 American space western film written and directed by Joss Whedon. It is a continuation of Whedon's short-lived 2002 Fox science fiction television series Firefly and stars the same cast, taking place after the events of the final episode. Set in 2517, Serenity is the story of the captain and crew of Serenity, a "Firefly-class" spaceship. The captain and first mate are veterans, having fought on the losing side. Their lives are interrupted by a psychic passenger who harbors a dangerous secret. ... more on Wikipedia

Serenity is ranked on...

Serenity is also found on...