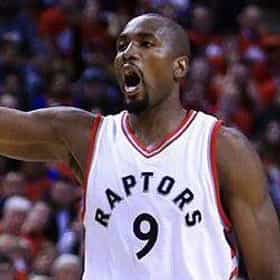 Serge Jonas Ibaka Ngobila (; born 18 September 1989) is a Congolese-Spanish professional basketball player for the Toronto Raptors of the National Basketball Association (NBA). Ibaka was drafted by the Oklahoma City Thunder's former incarnation, the Seattle SuperSonics, with the 24th overall pick in the 2008 NBA draft. Ibaka is a three-time NBA All-Defensive First Team selection and has twice led the league in blocks. Although born in the Republic of the Congo, Ibaka plays for the Spanish national basketball team in international competition. ... more on Wikipedia

Serge Ibaka is ranked on...

Serge Ibaka is also found on...