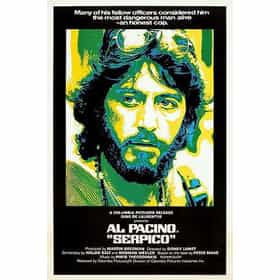 Serpico is a 1973 American drama film directed by Sidney Lumet and starring Al Pacino. Waldo Salt and Norman Wexler wrote the screenplay, adapting Peter Maas's biography of NYPD officer Frank Serpico. Both Maas's book and the film cover 12 years, 1960 to June 15, 1972, in the life of Serpico, who was trying to be an honest policeman. The film and principals were nominated for numerous awards, earning recognition for its score, direction, screenplay, and Pacino's performance. The film was also a commercial success. ... more on Wikipedia

Serpico is ranked on...

Serpico is also found on...