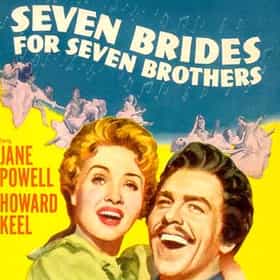 Seven Brides for Seven Brothers, is a musical film, photographed in Ansco Color in the CinemaScope format. The film was directed by Stanley Donen, with music by Saul Chaplin and Gene de Paul and lyrics by Johnny Mercer, and choreography by Michael Kidd. The screenplay, by Albert Hackett, Frances Goodrich, and Dorothy Kingsley, is based on the short story "The Sobbin' Women", by Stephen Vincent Benét. Seven Brides for Seven Brothers, which is set in Oregon in 1850, is particularly known for Kidd's unusual choreography, which makes dance numbers out of such mundane frontier pursuits. ... more on Wikipedia

Seven Brides for Seven Brothers is ranked on...

#308 of 626 The Greatest Guilty Pleasure Movies 201.9k VOTES   What makes a film a guilty pleasure? This is a movie that you love to watch, but won't display on your DVD shelf......
#318 of 396 The Best Western Movies Ever Made 360.8k VOTES The best Western movies ever made include some true classics from the early days of cinema, and more modern day films that c...
#53 of 63 The Best Western Movies of the 1950s 19.2k VOTES Sometimes you just need a little bit of the old heroes. The old American film heroes before rock 'n roll took over and chang...
#19 of 50 The Best Oscar-Nominated Movies of the 1950s 4.8k VOTES The 1950s: in America, the decade is synonymous with rock 'n' roll, bobby socks, and the movies. If that last one didn't com...
#11 of 119 The Most Rewatchable Movie Musicals 2.6k VOTES Musicals are some of the best comfort movies and often we end up memorizing every song. This is a list of musical movies we ...
#34 of 100 The Best Dance Movies Ever Made 21.7k VOTES Dance movies have been around since the inception of film: the best dance movies manage to make the audience care about the ...
#47 of 126 The Best Oscar-Winning Scores 9.6k VOTES What is best Oscar-winning musical film score? This list includes every film score that has won an Academy Award. Oscar-winn...
#19 of 41 The Best Musical Love Story Movies 2.9k VOTES Sometimes, it's best to say "I love you" in a song. Perhaps that's why musicals and romances are a match made in...
#15 of 32 The Best Dramas About Relationships Between Sisters 315 VOTES Sisters can be the best of friends, the most loyal of confidants, and sometimes even romantic rivals. The best drama movies ...
#28 of 163 The Best Musical Movies Rated G 8k VOTES A list of the best G-Rated musical movies ever made, ranked by film fans' votes. This list is ordered by popularity, so only...
#16 of 199 The Best Metro-Goldwyn-Mayer Movies List 4.4k VOTES List of Metro-Goldwyn-Mayer movies, ranked best to worst, including trailers, genres, and release dates. Metro-Goldwyn-Mayer...
#29 of 90 The Best Wedding Movies 96k VOTES A list of the best wedding movies. These are films that feature engagements and getting married as a central theme. If you b...
#21 of 52 The Best Comedy Movies of the 1950s 3k VOTES Some of the best '50s comedy movies include Marilyn Monroe, the Blonde Bombshell herself. She appears in several i...
#24 of 195 The Best G-Rated Comedies 6.5k VOTES List of G-Rated kids' comedies, ranked from best to worst with movie trailers when available. These comedies are all G-Rated...
#1 of 30 The Best Western Musicals 325 VOTES Western musical movies are a very distinct kind of thing. They combine two genres that you wouldn't necessarily expect ...
#1 of 16 The Best Jane Powell Movies 307 VOTES List of the best Jane Powell movies, ranked best to worst with movie trailers when available. Jane Powell's highest grossing...

Seven Brides for Seven Brothers is also found on...