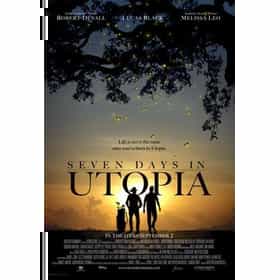 Seven Days in Utopia is a religious drama sport film directed by Matt Russell, starring Robert Duvall, Lucas Black, and Melissa Leo. The film is based on the book Golf's Sacred Journey: Seven Days at the Links of Utopia by Dr. David Lamar Cook, a psychologist who received a Ph.D. in Sport and Performance Psychology from the University of Virginia. In the movie version, Lucas Black plays Luke Chisholm, a young professional golfer who has a meltdown during a tournament. After shooting 80 in the final round, Chisholm crashes his car into a fence and gets wisdom from Johnny Crawford. After some instruction and guidance, Chisholm enters the Valero Texas Open, where he ends up in a playoff ... more on Wikipedia

Seven Days in Utopia is ranked on...

Seven Days in Utopia is also found on...