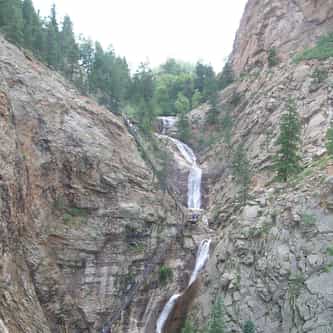 Seven Falls is a series of seven cascading waterfalls of South Cheyenne Creek in South Cheyenne Cañon, Colorado Springs, Colorado. It is a privately owned tourist attraction since in was opened in the early 1880s. Trails from the top of the falls lead to Midnight Falls, near the headwaters of South Cheyenne Creek, and Inspiration Point. The area sustained a significant flood in September 2013, which has closed Seven Falls until restoration is complete in Spring 2015 by The ... more on Wikipedia