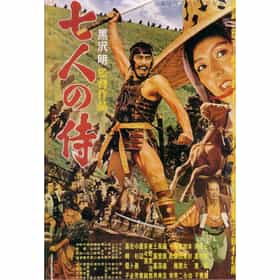 Seven Samurai is a 1954 Japanese Jidaigeki adventure film co-written, edited, and directed by Akira Kurosawa. It follows the story of a village of farmers that hire seven ronin to combat bandits who will return after the harvest to take their crops. Since its release, Seven Samurai has consistently ranked highly across critics' greatest film polls such as the BFI's Sight and Sound, Rotten Tomatoes and IMDB polls. It has remained highly influential, often seen as one of the most "remade, reworked, referenced" films in cinema. ... more on Wikipedia

Seven Samurai is ranked on...

#85 of 374 People who voted for Seven Samurai... People over 50 are 2x more likely to vote for this People in the Central US are 2x more likely to vote for this The 50+ Best War Movies Ever Made, Ranked 517.5k VOTES From classics like Saving Private Ryan to newer entries like Dunkirk and 1917, this list ranks the best movies about war, ba...
#93 of 266 The Best Ensemble Movies 17.3k VOTES The best ensemble movies feature an incredibly talented cast of actors and actresses, so much so that the cast overshadows e...
#14 of 46 Every Single Movie On Rotten Tomatoes With 100% Approval, Ranked 46.4k VOTES There are more 100% fresh movies on Rotten Tomatoes than you might think. Sure, some people think Rotten Tomatoes is bad and...
#62 of 599 The Greatest Epic Movies Ever Made 286.3k VOTES Need some movie ideas? Check out this list of the best epic films of all time, which encompasses some of the best movie...
#1 of 139 The Greatest Movies in World Cinema History 6.4k VOTES Hollywood may be the epicenter of the movie business, but many of the best films released each year hail from all over the w...
#149 of 395 The Greatest Movie Themes 81.7k VOTES A memorable movie theme song is an underrated crucial element that helps turn a great movie into an iconic one. At its core,...
#28 of 47 The Best Sword and Sandal Films Ever Made 7.8k VOTES What are the best sword and sandal movies of all time? This list of great sword and sandal films runs the gamut, featuring m...
#61 of 101 The Best Opening Movie Scenes of All Time 54.3k VOTES The best opening movie scenes of all time are those first sequences of iconic films that set the tone for the magnificence t...
#2 of 15 The 15 Best Movies About Suicide (or Seemingly Suicidal) Missions 687 VOTES Rogue One: A Star Wars Story is the latest in a long and proud tradition of suicide mission movies. Not to be confused ...
#36 of 131 The Best Existentialism Movies 5.4k VOTES A list of all the best existentialism movies ever made, many of which are streaming on Netflix and Amazon Prime. For more mo...
#149 of 735 People who voted for Seven Samurai... Men are 2x more likely to vote for this The Greatest Action Movies of All Time 437.6k VOTES The greatest action movies of all time starring some of the best action stars to have ever fought on screen. The best action...
#33 of 413 The All-Time Greatest Martial Art Movies 54.8k VOTES All the best movies with martial arts action compiled into a list of the best martial art movies. Martial arts movies are am...
#42 of 219 The Best Historical Drama Movies Of All Time, Ranked 101.2k VOTES Moviegoers rank the best historical drama movies and period pieces of all time below. So what makes a good historical drama ...
#1 of 16 The Best '50s Martial Arts & Kung Fu Movies 503 VOTES The greatest ‘50s kung fu and other martial arts movies are a diverse group of films from all over Asia. Production compan...
#11 of 201 The Best Movies of 1954 4.2k VOTES List of the best movies of 1954, with movie trailers when available. Film legends Paul Newman and Jack Lemmon made their big...
#1 of 22 The Best Samurai Movies 1.3k VOTES A list of the best samurai movies ever made, ranked by movie fans with film trailers when available. This samurai movie list...

Seven Samurai is also found on...