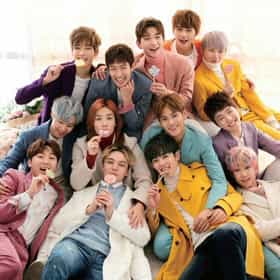 Seventeen, also stylized as SEVENTEEN or SVT, is a South Korean boy group formed by Pledis Entertainment in 2015. The group consists of thirteen members (Jun, Vernon, DK, Seungkwan, Hoshi, Joshua, S.Coups, Woozi, Wonwoo, Jeonghan, The8, Dino, and Mingyu) divided into three sub-units, each with a different area of specialization: a 'Hip-Hop Unit', 'Vocal Unit', and 'Performance Unit'. Seventeen has released two studio albums and four extended plays. The group's members are deeply involved in the composition and production of their discography and choreography and have been since debut, which prompted their nickname as a "self-producing" idol group. ... more on Wikipedia

Seventeen is ranked on...

#72 of 465 The Best Current Pop Groups/Singers 465.1k VOTES A list of the best current pop groups and singers who are making some of the best pop songs of 2019. The battle between...
#13 of 136 The Most Popular Kpop Groups Of 2020, Ranked 601.2k VOTES UPDATE: Which groups will top the greatest Kpop groups of the 2010s decade?  Who are the biggest Kpop groups right no...
#5 of 103 The 50+ Best K-pop Boy Groups 520k VOTES Including the best new and current Kpop boy groups, here is the list of Korean boy bands who are currently on top ...
#8 of 59 The Most Popular Kpop Boy Groups Of 2019, Ranked 90.8k VOTES Here are the best Kpop boy groups of 2019, ranked by fans everywhere. Featuring rookie groups, like TXT and ONEUS, as well a...
#42 of 64 The Greatest Boy Bands of All Time 314k VOTES Here's a list of the best boy bands of all time, with photos, ranked from best to worst by the community. Boy bands sometime...