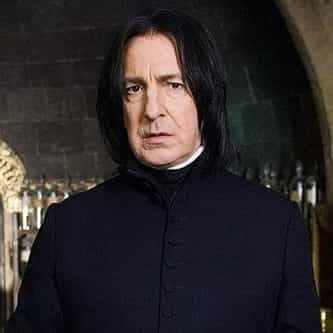 Episode
The Big Hair Do

Severus Snape is a fictional character in J. K. Rowling's Harry Potter series. He is characterised as a person of considerable complexity, whose coldly sarcastic and controlled exterior conceals deep emotions and anguish. In the first novel of the series, Snape is a teacher who is hostile from the start toward Harry. As the series progresses, Snape's character becomes more layered and complex. Rowling does not fully reveal the details of his true loyalties until the end of the final book, ... more on Wikipedia

2.9k votes 11 Severus Snape Fan Theories That Might Be Too Good To Be True

100.8k readers So, It Turns Out Professor Snape Is Transgender (According To Tumblr)

Professor Severus Snape IS LISTED ON