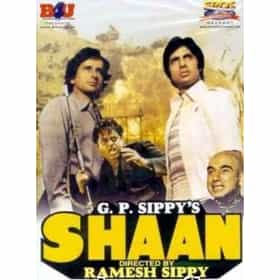 Shaan is a 1980 Indian Hindi action-thriller film. The film was directed by Ramesh Sippy after the super success of his previous venture, Sholay. The story was written by Salim-Javed. The film was expected to match the success of Sholay but failed to do so. The film however, ran to packed houses in its re-runs and made a lot of money. Eventually, it was declared to be the highest grosser of 1980 by IBOS. It did obtain the services of Sholay's music composer, R.D. Burman, whose songs for the film provided it with a Best Music nomination at Filmfare, this being its sole nomination. ... more on Wikipedia

Shaan is ranked on...

Shaan is also found on...