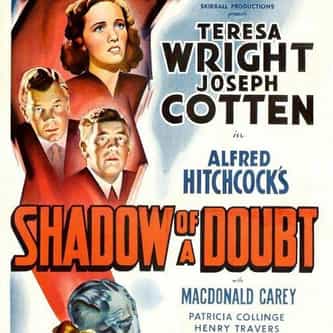 Shadow of a Doubt

Shadow of a Doubt is a 1943 American psychological thriller directed by Alfred Hitchcock, and starring Teresa Wright and Joseph Cotten. Written by Thornton Wilder, Sally Benson, and Alma Reville, the film was nominated for an Academy Award for Best Story for Gordon McDonell. In 1991, the film was selected for preservation in the United States National Film Registry by the Library of Congress as being "culturally, historically, or aesthetically significant". ... more on Wikipedia

Shadow of a Doubt IS LISTED ON