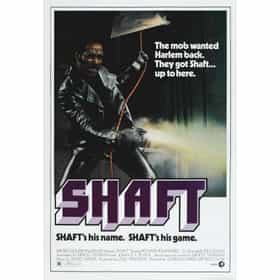 Shaft is a 1971 American blaxploitation film directed by Gordon Parks, released by Metro-Goldwyn-Mayer. An action film with elements of film noir, Shaft tells the story of a private detective, John Shaft, who travels through Harlem and to the Italian neighborhoods in order to find the missing daughter. It stars Richard Roundtree as John Shaft, Moses Gunn as Bumpy Jonas, Drew Bundini Brown as Willy, Charles Cioffi as Lt. Vic Androzzi, Christopher St. John as Ben Buford, and Gwenn Mitchell and Lawrence Pressman in smaller roles. ... more on Wikipedia

Shaft is ranked on...

#96 of 719 The Best Black Movies Ever Made, Ranked 661k VOTES The best black movies are favorites that explore African-American culture and themes. This list is ranked by film fans, many...
#132 of 582 The Greatest Film Scores of All Time 227.7k VOTES This list contains greatest movie themes and scores ever recorded, chosen by the Ranker community. (NOTE: This list is for f...
#242 of 591 The Best '70s Movies 69.4k VOTES This list of the best movies of the '70s includes all of the top films from the 1970s, including some of the best movies eve...
#319 of 547 The Greatest Movies for Guys 133.4k VOTES The best guy movies of all time, ranked by fans and critics. This list includes some of the greatest guy movies ever to hit ...
#239 of 241 The Most Inspirational Movies Ever 46.7k VOTES This inspirational movies list, with videos, includes some of the most uplifting films of all time. Inspiring films do not c...
#160 of 376 The Greatest Movie Themes 80.2k VOTES A memorable movie theme song is an underrated crucial element that helps turn a great movie into an iconic one. At its core,...
#22 of 25 The Best Cowboy Cop Movies, Ranked 566 VOTES Cowboy cops are loose cannons. These characters operate by their own set of rules, often throwing police protocol out the ...
#27 of 120 The Best Movies of 1971 6k VOTES List of the best movies of 1971, with movie trailers when available. Academy Award winning actor Daniel Day-Lewis made his b...
#37 of 51 The Best '70s Action Movies 4.1k VOTES When it comes the action movies, the grittier, the better. The top '70s action movies have non-stop excitement, thrills, sus...
#91 of 132 The Most Powerful Movies About Racism 13.1k VOTES A list of the best racism movies ever made, ranked by movie fans with film trailers when available. This racism movie list i...
#10 of 43 The Best Exploitation Movies of the 1970s 1.8k VOTES The best ‘70s exploitation movies are a dizzying blend of graphic sex, sensational violence, and a dash of kitsch. Nazis, fa...
#3 of 43 The Best Black Movies of the 1970s 5.1k VOTES When you think about the best '70s black movies, you think about the man who would risk his neck for his brother man. The on...
#14 of 57 The Best Black Action Movies, Ranked 2.7k VOTES This list contains information on the best black action movies, ranked from best to worst by user votes. The best black acti...
#24 of 25 The Top 25 Must-See Quintessential Action Movies 2.6k VOTES While some see action movies as a genre only of interest to macho frat boys, they are dead wrong. There are some essential a...
#213 of 377 The Greatest Suspense Movies 22.5k VOTES A list of all the best suspense movies ever made, many of which are streaming on Netflix and Amazon Prime. Find out if your ...
#2 of 57 The Best R-Rated Blaxploitation Movies 393 VOTES List of R-Rated blaxploitation movies, ranked from best to worst with movie trailers when available. This list takes the bes...
#9 of 36 The Best Action Movies Set in New York 123 VOTES Action films based in New York take advantage of the Big Apple's energy. It's called "the city that never sleeps&q...
#7 of 55 The Best Richard Roundtree Movies 330 VOTES List of the best Richard Roundtree movies, ranked best to worst with movie trailers when available. Richard Roundtree's high...

Shaft is also found on...