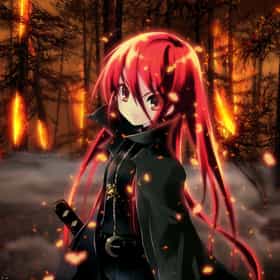 Shakugan no Shana, also known simply as Shana, is a Japanese light novel series written by Yashichiro Takahashi with illustrations by Noizi Ito. ASCII Media Works published 26 novels from November 2002 to November 2012 under their Dengeki Bunko imprint. The story focuses on Yuji Sakai, a high school boy who inadvertently becomes involved in an age-old conflict between forces of balance and imbalance in existence. In the process, he befriends a fighter for the balancing force and names her "Shana". The series incorporates fantasy and slice of life elements into its tale. Two manga adaptations were published by ASCII Media Works in Dengeki Daioh and Dengeki Maoh. Between 2005 ... more on Wikipedia

Shakugan no Shana is ranked on...

#207 of 891 The Best Anime Series of All Time 5.7M VOTES You love anime but what tops this list of the best anime series ever made? Top anime series include shows like Death Note, A...
#36 of 130 The Best Fantasy Anime of All Time 377.1k VOTES From classics like Wolf's Rain to newer series like Sword Art Online, fantasy is one of the most popular genres of anime. Th...
#128 of 318 The Best English Dubbed Anime of All Time 969k VOTES If you're one of those people who only watches anime in Japanese, we don't blame you. English dubs can really ruin a series ...
#208 of 258 The Best Romance Anime Ever Made 817.7k VOTES It's time to get in touch with your emotional side, as we're ranking the top romance anime that has ever been made. These sh...
#101 of 190 The Best Action Anime of All Time 638.5k VOTES Action anime is hard to define, but if a show has car chases and epic battles, then it probably fits the genre's descri...
#61 of 132 The Best Supernatural Anime 155.7k VOTES Do you have a taste for the supernatural when you watch anime? There's nothing wrong with that. In fact plenty of anime seri...
#95 of 121 The 100+ Best Anime Streaming On Hulu 192.2k VOTES Here is the list of the best anime streaming on Hulu, as determined by anime fans like you. Hulu has quite an expansive coll...
#28 of 39 The Best Anime Like Bleach 14.9k VOTES It's one of the most popular shonen anime of all time, but what other similar shows are worth watching? Here are 20+ anime l...
#7 of 15 15 Random Action Anime You Probably Haven't Seen 2.7k VOTES While there's lots to love about popular action anime like My Hero Academia, Demon Slayer, and Naruto, t...
#22 of 32 The Best Anime Like Strike The Blood 1.1k VOTES When Kojou Akatsuki finds out that he is one of the most powerful vampires alive, his entire life changes. Despite...
#9 of 13 13 Anime That Are Just Way Too Long 14.9k VOTES There is nothing better than an engaging anime with a story so dynamic that you can’t help but become completely devote...
#8 of 15 The 15 Best Action Romance Anime You Need To Watch 9.4k VOTES Maybe you're an action buff who appreciates a good love story. On the flip side, maybe you're a hopeless romantic ...
#12 of 16 The Best Anime Like Fairy Tail 6.5k VOTES What is the best anime show like Fairy Tail? Once you finish watching every episode the show has to offer, you might be lo...
#51 of 59 The Best Anime to Watch While You're Stoned 31.4k VOTES If you're an anime fan who tokes, you're probably looking for some good anime to watch while stoned. This list ranks some of...
#199 of 1,079 The Best Anime Movies of All Time 117.8k VOTES A list of all the best anime movies ever made, many of which are streaming on Netflix and Amazon Prime. This anime movie lis...
#17 of 24 The Best Anime Like D Gray Man 520 VOTES Need some D Gray Man anime recommendations? Since it's such an influential series, let's rank the best anime like&...
#24 of 30 The Best Anime Like Campione! 891 VOTES Need some Campione anime recommendations? Since it's such a unique series, let's rank the best anime like Cam...
#16 of 30 The Best Anime Like Kaze No Stigma 1.2k VOTES Need some Kaze No Stigma anime recommendations? Since it's such an influential series, let's rank the best anime l...
#52 of 102 The Best Harem Anime Of All Time 407.1k VOTES List of the best Harem anime, voted on by Ranker's anime community. If you're not familiar with the harem genre, it usually ...
#10 of 13 The 13 Best Anime Like A Certain Magical Index 1.7k VOTES In a world where science has advanced much more than our own and humans are able to have psychic powers, Touma Kamijou ...
#14 of 20 The Best Anime Like Pandora Hearts 389 VOTES This list ranks the best anime that are similar to Pandora Hearts in setting, theme, and even plot, with the order determine...

Shakugan no Shana is also found on...