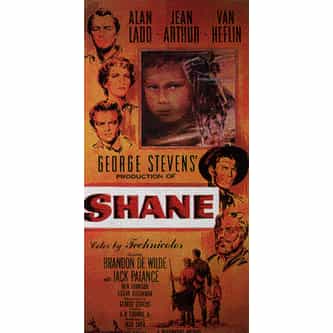 Shane is a 1953 American Technicolor Western film from Paramount. It was produced and directed by George Stevens from a screenplay by A. B. Guthrie, Jr., based on the 1949 novel of the same name by Jack Schaefer. Its Oscar-winning cinematography was by Loyal Griggs. The film stars Alan Ladd, Jean Arthur and Van Heflin, and features Brandon deWilde, Elisha Cook, Jr., Jack Palance and Ben Johnson. Shane was listed No. 45 in the 2007 edition of AFI's 100 Years…100 Movies list and No. 3 on ... more on Wikipedia

Shane IS LISTED ON