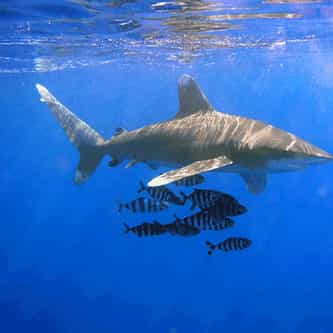 Sharks are a group of elasmobranch fish characterized by a cartilaginous skeleton, five to seven gill slits on the sides of the head, and pectoral fins that are not fused to the head. Modern sharks are classified within the clade Selachimorpha (or Selachii) and are the sister group to the rays. However, the term "shark" has also been used for extinct members of the subclass Elasmobranchii outside the Selachimorpha, such as Cladoselache and Xenacanthus, as well as other ... more on Wikipedia

848.1k readers What It's Like to Be Attacked by a Shark

21.7k readers These Tips Will Help You Survive A Shark Attack

Shark IS LISTED ON

#5 of 13
1.8k VOTES 13 Things That Are Surprisingly A Lot Older Than We Thought
#11 of 23
5.4k VOTES Mind-Blowing Facts About The Ocean And Its Creatures That Will Make You Question Everything
#1 of 12
10.6k VOTES Facts About Animals That You Have Completely Wrong Thanks To Movies And TV
#11 of 17
4k VOTES 17 Seriously Weird Sea Creature Eggs That'll Change How You See The Ocean
#4 of 11
1.7k VOTES 11 Super Creepy Animal Ultrasounds You Can't Unsee
#3 of 46
5.8k VOTES What Sea Creature Do You Want to Be?
94k VIEWS Modern Animals And Their Prehistoric Counterparts
84.9k VIEWS Look Through the Eyes of Animals: A Video Journey
7k VIEWS Immaculate Conception: Animals That Have Virgin Births
13.9k VIEWS 13 Crazy Ways Animals Have A Sixth Sense
31.7k VIEWS Animals That Devour Their Prey In Just One Bite
1.3k VIEWS Animals Are Being Poached For Traditional "Medicine" That Has No Medicinal Value