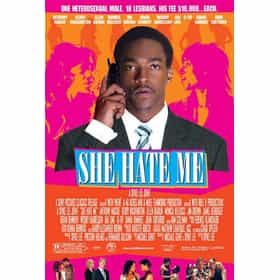 She Hate Me is a 2004 independent comedy-drama film directed by Spike Lee and starring Anthony Mackie, Kerry Washington, Ellen Barkin, Monica Bellucci, Brian Dennehy, Woody Harrelson, Bai Ling and John Turturro. The film garnered controversy, and, as with many of Lee's films, touches on comedy, drama, and politics. Unlike many prior works, Spike Lee does not have an acting credit in this film. The film was shot mostly on location in New York City, including each of the city's five boroughs. It was nominated for various awards, but did not win. She Hate Me was released in July 2004 and grossed almost half a million dollars at the box office in limited release, with overall revenues of ... more on Wikipedia

She Hate Me is ranked on...

She Hate Me is also found on...