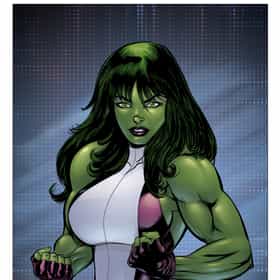 She-Hulk is a fictional superheroine that appears in American comic books published by Marvel Comics. Created by writer Stan Lee and artist John Buscema, she first appeared in Savage She-Hulk #1. A cousin to Dr. Bruce Banner, Walters once received an emergency blood transfusion from him when she was wounded, which led to her acquiring a milder version of his Hulk condition. As such, Walters becomes a large powerful green-hued version of herself while still largely retaining her personality; in particular she retains her intelligence and emotional control, though like Hulk, she still becomes stronger if enraged. In later issues, her transformation is permanent. She-Hulk has been a ... more on Wikipedia

The Best Storylines For Fans Of She-Hulk 217 votes After Jennifer Walters picked up some irradiated blood from her cousin back in 1980, she's been the Savage She-Hulk! Since t...
She-Hulk Is A Super-Powered Lawyer Who Can Go Toe-To-Toe With Her Big Green Cousin 12k views Those who reacted with misogynistic furor about some new “female Hulk” when Marvel Studios announced its upcoming She-Hulk s...

She-Hulk is ranked on...

She-Hulk is also found on...