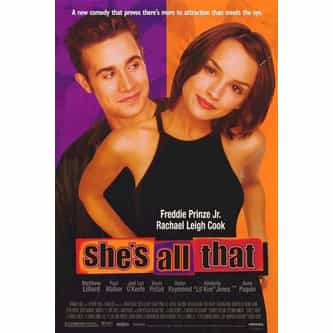 Tagline
A new comedy that proves there's more to attraction than meets the eye.

She's All That is a 1999 American teen romantic comedy film directed by Robert Iscove and starring Freddie Prinze, Jr. and Rachael Leigh Cook. It is a modern adaptation of George Bernard Shaw's play Pygmalion and George Cukor's 1964 film My Fair Lady. It was one of the most popular teen films of the 1990s and reached No. 1 at the box office in its first week of release. In April 2015, it was announced that the film will be remade by The Weinstein Company. ... more on Wikipedia

lists about She's All That

52 votes The Best 'She's All That' Quotes

She's All That IS LISTED ON