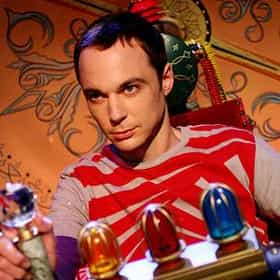 Dr. Sheldon Lee Cooper is a fictional character on the CBS television series The Big Bang Theory, portrayed by actor Jim Parsons. Parsons won an Emmy Award in 2010 for this role. A Caltech theoretical physicist, Sheldon is Leonard Hofstadter's (Johnny Galecki) roommate and colleague. They live across the hallway from Penny (Kaley Cuoco). Sheldon is distinctive for his overtly intellectual personality: he is calculating and cynical, he exhibits a strict adherence to routine, a lack of understanding of irony, sarcasm and humor, a habit of constantly expressing admiration for his superior intellect (which is sometimes found offensive by the other characters), and a complete lack of ... more on Wikipedia

The Best Things Sheldon Cooper Ever Said 2.9k views What are the funniest Sheldon Cooper quotes that crack you up just from thinking about them? Sheldon is one of those charact...

Sheldon Cooper is ranked on...

#14 of 1,423 People who voted for Sheldon Cooper... also upvote Buffy Summers on The Greatest Female TV Characters of All Time also upvote Friends on The Greatest TV Shows of All Time The Greatest TV Characters of All Time 1.2M VOTES List of TV's most memorable characters, of all time, chosen by the Ranker community. What makes a character live on in the p...
#526 of 787 The Most Annoying TV and Film Characters Ever 1.5M VOTES You know them. You hate them. Honestly, who knows why these characters even exist. Did someone think they were funny? M...
#12 of 44 Current TV Characters Who Are the Most Relatable 15.7k VOTES Are you more Nick Miller or Homer Simpson? Miranda Bailey or Sarah Manning? Vote for the most relatable current TV character...
#15 of 487 The Funniest TV Characters of All Time 782.5k VOTES These are the funniest television characters ever created, as determined by the votes and selections of Ranker users. Lots...
#9 of 62 The Best Male Characters on TV Right Now 39.8k VOTES Some of the greatest characters in this new golden age of TV are male right now, and their characters span centuries, cultur...
#10 of 127 The Most Beloved Grumps in TV History 24.5k VOTES List of the best TV grumps. Male or female, these are the greatest grumpy TV characters -- television curmudgeons whose pess...
#5 of 96 The Greatest Breakout Characters in TV History 45.5k VOTES When a television show first starts, the writers of the program already have the star in mind. They write for the characte...
#10 of 60 The Greatest Scientist TV Characters 17.3k VOTES The best scientists in TV history run the gamut from dependable pragmatists (Agent Scully, The X-files), to socially inept a...
#4 of 44 The Most Well-Acted Characters of All Time 13.1k VOTES There’s such a huge different when discussing television characters versus film characters. The main distinction is that we ...
#7 of 15 15 Famous People Sitting On The Iron Throne 8.2k VOTES LIst of popular characters sitting on the Iron Throne including actors, television stars, fictional characters, cartoons, mu...
#1 of 36 Who Is The Best Big Bang Theory Character? 16.1k VOTES Need a list of all characters from The Big Bang Theory? With so many funny Big Bang characters, it's tough to say who the gr...
17 Characters You Didn't Realize Were Icons Of LGBTQ+ Pop Culture 21.4k VIEWS LGBTQ+ people are hugely underrepresented in pop culture. For lack of an alternative, the community has a lon...
TV Characters You Never Realized Are On The Spectrum 89.8k VIEWS While a character like Max Braverman from Parenthood was officially diagnosed with Asperger’s syndrome, as part of a storyli...