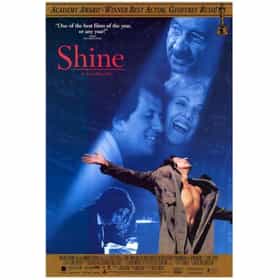 Shine is a 1996 Australian biographical drama film based on the life of pianist David Helfgott, who suffered a mental breakdown and spent years in institutions. It stars Geoffrey Rush, Lynn Redgrave, Armin Mueller-Stahl, Noah Taylor, John Gielgud, Googie Withers, Justin Braine, Sonia Todd, Nicholas Bell, Chris Haywood and Alex Rafalowicz. The screenplay was written by Jan Sardi, and directed by Scott Hicks. The degree to which the film's plot reflects the true story of Helfgott's life is disputed. The film made its US premiere at the Sundance Film Festival. Geoffrey Rush was awarded the Academy Award for Best Actor in 1997 for his performance in the lead role. ... more on Wikipedia

Shine is ranked on...

Shine is also found on...