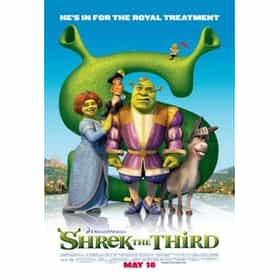 Shrek the Third is a 2007 American computer-animated fantasy comedy film, and the third installment in the Shrek franchise. It was produced by DreamWorks Animation and is the first in the series to be distributed by Paramount Pictures which acquired DreamWorks Pictures in 2006. It was released in U.S. theaters on May 18, 2007. Although the film received mixed reviews from critics, it grossed $798 million, making it a commercial success. It was produced with the working title of Shrek 3, the name being changed to avoid potential confusion with Shrek 4-D. Like the first two Shrek films, the film is based on fairy tale themes. It was nominated for Best Animated Movie at the 2008 Kids' ... more on Wikipedia

Shrek the Third is ranked on...

Shrek the Third is also found on...