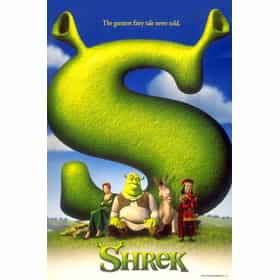 Shrek is a 2001 American computer-animated fantasy-comedy film produced by PDI/DreamWorks, released by DreamWorks Pictures, directed by Andrew Adamson and Vicky Jenson, featuring the voices of Mike Myers, Eddie Murphy, Cameron Diaz, and John Lithgow. It is loosely based on William Steig's 1990 fairy tale picture book Shrek!, and somewhat serves as a parody film, targeting other films adapted from numerous children's fantasies. The film made notable use of popular music; the soundtrack includes music by Smash Mouth, Eels, Joan Jett, The Proclaimers, Jason Wade, Baha Men, and John Cale. The rights to the books were originally bought by Steven Spielberg in 1991, before the founding of ... more on Wikipedia

12 Things You Never Knew About The Making Of 'Shrek' 10.8k views Tales from behind the scenes of Shrek reveal a lot about the animated hit. Though the movie seemingly appeared of nowhere in...
The Best 'Shrek' Quotes 237 votes The best Shrek quotes make you realize how funny the movie really is, even if you haven't seen it in a while. Let's rank the...
There's A Festival For Shrek Superfans And It's Just As Wild As You'd Imagine 3.4k views Ah, Shrek. The beloved animated 2001 film – and its titular bright green ogre, voiced by Mike Myers – has inspired sequels, ...

Shrek is ranked on...

Shrek is also found on...