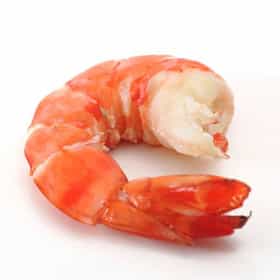 Shrimp and prawn are important types of seafood that are consumed worldwide. In biological terms, shrimp and prawns belong to different suborders of Decapoda, however they are very similar in appearance and in commercial farming and fisheries, the terms are often used interchangeably. However, recent aquaculture literature increasingly uses the term "prawn" only for the freshwater forms of palaemonids and "shrimp" for the marine penaeids. In the United Kingdom, the word "prawn" is more common on menus than "shrimp"; while the opposite is the case in North America. The term "prawn" is also loosely used to describe any large shrimp, ... more on Wikipedia

Shrimp is ranked on...

Shrimp is also found on...