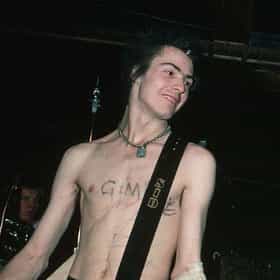 Sid Vicious (born John Simon Ritchie, 10 May 1957 – 2 February 1979) was an English bassist and vocalist. He achieved fame as a member of the punk rock band the Sex Pistols, replacing Glen Matlock, who had fallen out of favour with the rest of the group. Due to intravenous drug use, Vicious was hospitalised with hepatitis during the recording of the Sex Pistols' only studio album, Never Mind the Bollocks, Here's the Sex Pistols; his bass is only partially featured on one song - "Bodies". Vicious later appeared as a lead vocalist, performing three songs, on the soundtrack to The Great Rock 'n' Roll Swindle, a largely fictionalised documentary about the Sex Pistols. As the Sex ... more on Wikipedia

The Saddest Parts Of Sid & Nancy's Doomed Romance 7.3k views The sordid and sad story of Sid Vicious and Nancy Spungen's doomed love has permeated rock n' roll since Spungen's murder in...
Sid Vicious's Life Was Just As Messed Up As His Death 976.8k views Few rock stars have burned out with the same vigor as Sid Vicious. His fireball career lasted only two years but in that tum...

Sid Vicious is ranked on...

Sid Vicious is also found on...