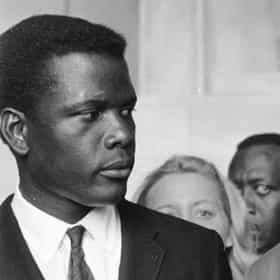 Sir Sidney Poitier, (; born February 20, 1927) is a Bahamian-American actor and film director. In 1964, Poitier became the first Bahamian and first black actor to win an Academy Award for Best Actor, and the Golden Globe Award for Best Actor for his role in Lilies of the Field. He continued to break ground by starring in three successful 1967 films, all of which dealt with issues involving race and race relations: To Sir, with Love; In the Heat of the Night; and Guess Who's Coming to Dinner, making him the top box-office star of that year.Poitier has directed a number of films, including Uptown Saturday Night, Let's Do It Again, and A Piece of the Action, with Bill Cosby; Stir Crazy, ... more on Wikipedia

Sidney Poitier is ranked on...

#322 of 1,042 Celebrity Death Pool 2020 74.3k VOTES They may be beloved performers, award winners, or game changers, but no matter how famous, you can’t escape death. This cele...
#26 of 1,148 People who voted for Sidney Poitier... People over 50 are 2x more likely to vote for this also upvote Twilight Saga Franchise on The Most Overrated Movies of All Time The Best Actors in Film History 2.2M VOTES The best actors ever are ranked here in this list of the best actors in film history. These are the greatest actors ever to ...
#199 of 332 The Coolest Actors Ever 747.7k VOTES As movie fans, we like to think of our favorite actors as being larger than life. With all of the coverage that these stars ...
#479 of 2,830 The Most Influential People of All Time 2.4M VOTES This is a list of the most influential people of all of human history. This means that the individuals on this list have had...
#118 of 179 The Best Living American Actors 268.7k VOTES It takes a lot to make a movie great. There has to be excellent writing, production, direction, editing, and of course, acti...
#8 of 41 The Best Living Actors Over 80 37.4k VOTES The best living actors in their 80s are all seasoned veterans in Hollywood who were born in 1939 or earlier. These men ...
#35 of 2,003 People who voted for Sidney Poitier... People over 50 are 2x more likely to vote for this also upvote Morgan Freeman on The Best Actors Working Today The Greatest Actors & Actresses in Entertainment History 1.7M VOTES The best actors and actresses of all time, male and female, ranked by film fans worldwide. This list of greatest actors and ...
#44 of 82 Celebrities You Think Are The Most Humble 56k VOTES Humble: to have or show a low estimate of one's own importance. Humility is a rare virtue, particularly in a socia...
#14 of 39 The Very Best Black Directors, Ranked 2.6k VOTES Films like 12 Years a Slave have made movie history and garnered tons of awards for black, British film director, Steve...
#167 of 1,452 Celebrity Death Pool 2018 477.7k VOTES Welcome to Celebrity Death Pool 2018! In increasingly uncertain times, there remains one constant in life - we all die. Cele...
#17 of 85 The Best African American Actors in Film 32k VOTES From any era and genre, these are the greatest African American actors in film history, ranked by the community to determine...
#38 of 82 The Best Actors to Ever Win Best Actor in a Leading Role 30k VOTES Every year the Academy evaluates a year's worth of brilliant performances and picks what they believe to be the best of the ...
#20 of 25 Old Celebrities You Didn't Realize Are Still Alive 275.7k VOTES Here is a list of famous people you didn't realize are still alive. These old actors and actresses were stars decades a...
#21 of 44 The Best Actors Who Won an Oscar and a Golden Globe for the Same Performance 8.9k VOTES The Golden Globes and the Academy Awards don't always go hand in hand, whether its Best Picture, Best Director, or any of th...
#91 of 185 Celebrity Death Pool 2014 31.5k VOTES Celebrity death pool 2014: Here's a complete list of celebrities who just might die in 2014. Every year we lose more and mor...
The Locations of All Hollywood Walk of Fame Stars 418.7k VIEWS A list of stars on the Hollywood Walk of Fame, with photos. This list includes all television and movie stars. Acquiring a s...
50 Famous Celebrities of Caribbean Descent 76.7k VIEWS The Caribbean is a beautiful, tropical grouping of over 700 islands, islets, cays, and reefs, and is broken up into 30 terri...
Guests on the Final Oprah Winfrey Shows 15k VIEWS Oprah's final days as the queen of daytime television are approaching and May 25 marks the last episode of the Oprah Winfrey...

Sidney Poitier is also found on...