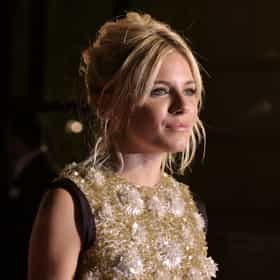 Sienna Rose Diana Miller (born 28 December 1981) is a British-American actress. Born in New York City and raised in London, she began her career appearing in British films, with a supporting role in 2004's crime thriller Layer Cake, followed by Alfie (also 2004). In 2006, Miller portrayed the lead role of Edie Sedgwick in Factory Girl, followed by a supporting role in Stardust (2007). In 2008, she was nominated for a BAFTA Rising Star Award. Miller would garner mainstream attention in the late 2000s for her role in G.I. Joe: The Rise of Cobra (2009), and received critical acclaim for her role as Tippi Hedren in the television film The Girl (2012), for which she was nominated for a ... more on Wikipedia

Sienna Miller is ranked on...

Sienna Miller is also found on...