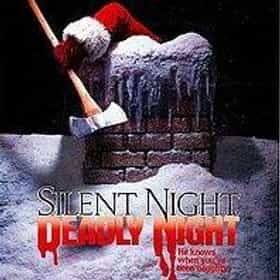 Silent Night, Deadly Night is a 1984 American slasher film produced by Ira R Barmak, written by Michael Hickey, directed by Charles E. Sellier, Jr. and starring Robert Brian Wilson, Lilyan Chauvin, Gilmer McCormick, Toni Nero, Linnea Quigley, Britt Leach and Leo Geter. The film focuses on a young boy who, after witnessing his parents' brutal murder at the hands of a man clad in a Santa suit on Christmas, grows up tumultuously in a Catholic orphanage and slowly emerges into a spree killer himself. The film caused an uproar when released in 1984 during the holiday season, and has developed a cult following. ... more on Wikipedia

#269 of 769 The Best Horror Movies of All Time 1M VOTES Horror movies, ranked by adrenaline junkies worldwide. Anyone can vote on this CrowdRanked list, and can even add your own f...
#67 of 167 The Best Movies of 1984 12k VOTES A list of the best movies of 1984, from instant classics like The Karate Kid to adventure films like Indiana Jones and the...
#89 of 128 The Best Horror Movie Franchises 109.8k VOTES What are the best horror movie franchises? Certainly, some of the biggest factors in determining a great horror movie series...
#32 of 55 The Worst Christmas Movies 10.3k VOTES The absolute worst Christmas movies ever made, ranked from the most popular to the least, based on the votes of the Ranker c...
#2 of 12 12 Ridiculously Scary Christmas Movies to Watch During the Holidays 2.4k VOTES It’s the most wonderful, joyous time of the year! So break out all your terrifying, scary Christmas movies. Sure, ...
#2 of 14 The 14 Most Messed Up Pop Culture Santas and the Naughty Crimes They Committed 374 VOTES It might strike some as surprising the number of psychotic Santas that exist in pop culture, but the most fearsome mons...
#82 of 161 The Best '80s Horror Movies 104.9k VOTES This list of the best 80s horror movies is a lengthy one, with good reason. The 1980s were a phenomenal decade for horror fi...
#15 of 84 The Best Slasher Movies of the 1980s 6.6k VOTES It's hard to argue that the 80s wasn't the pinnacle of the slasher genre. This best 1980s slasher movie list features severa...
#38 of 69 The Scariest Movies of the 1980s 14.3k VOTES The 1980’s were know for a lot of historical events such as the ending of the Cold War, the fall of the Berlin Wall in 1989,...
#135 of 209 The Best Classic Horror Movies 83.2k VOTES If you’re a true horror film enthusiast then you’ll recognize these famous directors and the movies that earned them worldwi...
#65 of 181 The Best Slasher Movies 90.2k VOTES A list of the best slasher movies. These are some of the best slasher films ever made, but if you feel we've missed one, ple...
#4 of 51 The Best Christmas Horror Movies That Will Sleigh You 502 VOTES The best Christmas Horror movies capture the spirit of the holidays and then scare it right out of you. If you are looking f...
#4 of 58 The Best Horror Movies of 1984 899 VOTES List of the best 1984 horror movies, ranked by how many upvotes they've received by other fans of the genre. All types of sc...
#125 of 157 The Best TriStar Pictures Movies List 1.6k VOTES List of TriStar Pictures movies, ranked best to worst, including trailers, genres, and release dates. TriStar Pictures produ...
#15 of 24 The Top 25 Must-See Quintessential Slasher Movies 531 VOTES If there's one thing that remains true about slasher films, it's that they come and go in clusters. If one becomes a mega-hi...