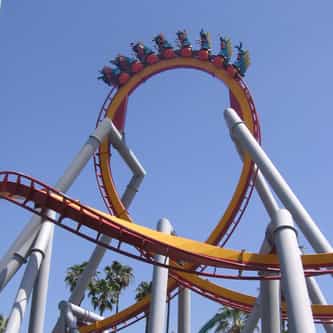 Silver Bullet is a western-themed steel inverted roller coaster designed by Bolliger & Mabillard located at Knott's Berry Farm, an amusement park in Buena Park, California. The $16 million roller coaster was announced on December 1, 2003 and opened on December 7, 2004. A first rider auction was also held where people would bid on seats to be the first riders. The track is approximately 3,125 feet long and the lift hill is about 146 feet tall. The ride lasts two minutes and thirty ... more on Wikipedia

Silver Bullet IS LISTED ON

best shopping in the us, number of volcanoes in usa, computer keyboard brands, las vegas casinos list, Jenna Louise Coleman Images, shows like Narcos, songs with Self in the title, most gay friendly cities in the us, most toxic places in the us, life below zero cast