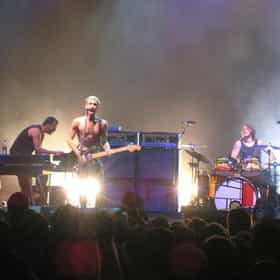 Silverchair were an Australian rock band, which formed in 1992 as Innocent Criminals in Merewether, Newcastle with Ben Gillies on drums, Daniel Johns on vocals and guitars, and Chris Joannou on bass guitar. The group got their big break in mid-1994 when they won a national demo competition conducted by SBS TV show Nomad and ABC radio station, Triple J. The band was signed by Murmur, and were successful in Australia and internationally. Silverchair won more ARIA Music Awards than any other artist in history with 21 wins from 49 nominations. They also received six APRA Awards, with Johns winning three songwriting awards in 2008. All five of their studio albums debuted at number one on ... more on Wikipedia

Silverchair is ranked on...

#290 of 2,211 People who voted for Silverchair... also upvote Harry Potter Franchise on The Best Movies of All Time also upvote Pirates of the Caribbean Franchise on The Best Movies of All Time The Best Rock Bands of All Time 3.3M VOTES Update: Follow Ranker's official New Rock 2020 playlist on Spotify! There are thousands of rock bands that have ...
#203 of 358 The Worst Rock Bands of All Time 749.5k VOTES Here they are: the absolute worst rock bands in history, ranked from the most awful bands to the kind of okay but still pret...
#35 of 115 The Best Musical Trios Of All-Time 35.7k VOTES Across all types of music what is the best 3 piece band ever? Add your own favorite band...heck even country works... countr...
#246 of 409 The Greatest Musical Artists of the '90s 1M VOTES   Take a big whiff- "mmmbop", it smells like the '90s in here! An incredibly eclectic decade for music, the...
#10 of 31 People who voted for Silverchair... People in the Central US are 3x more likely to vote for this also upvote Halloween Franchise on The Greatest Horror Films of All Time Great One Hit Wonder Artists of the '90s 16k VOTES Want to listen to all these songs as a playlist? Switch to "Info View" to get all the videos on one page for easil...
#9 of 73 The Best Grunge Bands 52.2k VOTES The beginning of the 1990s saw a new genre of rock emerge: grunge music. Grunge bands emerged left and right, primarily from...
#152 of 676 The Best Alternative Bands/Artists 200.6k VOTES At the end of the 1980s, at the peak of glam rock and hair metal, a new genre began to emerge from the underground. Since it...
#19 of 310 The Best Australian Bands, Ranked 165.5k VOTES Who are the best Australian bands? The best bands from Australia you'll find on this list come from a variety of different m...
#38 of 114 The Best Bands with Colors in Their Names 5.8k VOTES Quick: someone has just asked you to rattle off the best bands named after a color! What do you say? Drawing a blank? This l...

Silverchair is also found on...