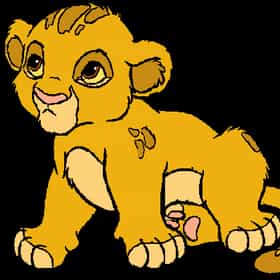 Simba is a fictional character who appears in The Lion King franchise. Introduced in Disney Animation's 32nd animated feature film The Lion King, the character subsequently appears in its sequels The Lion King II: Simba's Pride and The Lion King 1½. Simba was created by screenwriters Irene Mecchi, Jonathan Roberts and Linda Woolverton. While Mark Henn served as Simba's supervising animator as a cub, Ruben A. Aquino animated the character as he appears as an adult. Although considered an original character, Simba was inspired by the character Bambi from Disney's Bambi, as well as the stories of Moses and Joseph from the Bible. Additionally, several similarities have been drawn ... more on Wikipedia

Simba is ranked on...

#167 of 3,792 The Best Movie Characters of All Time 1M VOTES List of the best movie characters of all time, ranked by film buffs and people like you. This list includes performances by ...
#73 of 174 The Best To Worst Kingdom Hearts Characters 25.2k VOTES Kingdom Hearts is a magical action-adventure RPG gaming series combining the worlds of Disney and Final Fantasy, b...
#7 of 66 The Greatest Fictional Kings 13.5k VOTES Are you a fan of movies with kings in them? Browse through this list of the greatest fictional kings to find the ruler you a...
#5 of 98 The Greatest Cats in Cartoons & Comics, Ranked by Fans 32.5k VOTES Cats are awesome, and doubly so for cartoon cats! Cats are often used in cartoons and animated films as comic relief and ant...
#4 of 111 The Best Pop Culture Pet Names 14.7k VOTES Looking for a cute pop culture pet name for a new cat, dog, or even bird? Naming a pet is no easy decision, but this list of...
#7 of 20 20 Pieces Of Amazing Minimalist Fan Art That Real Fans Will Recognize In An Instant 11.8k VOTES Some of the world's most recognizable characters need little more than a couple of well-placed lines and a solid color schem...
#16 of 20 51 Works of Latte Art You'll Never Want to Drink Away 8k VOTES Latte art is the practice of baristas drawing awesome portraits, landscapes or pictures using milk foam. These are the best ...
#5 of 120 The Greatest Fictional Cats Of All Time 26.3k VOTES For this poll we've created a list of the greatest cats of all time, featuring cats you know from movies, television, video ...
#2 of 29 The Greatest Lion Characters of All Time 4.9k VOTES For this poll we've created a list of the greatest lions of all time, featuring lions you know from movies, television, vide...
#12 of 27 25+ Movie Animals To Name Your Dog After 244 VOTES Do you consider yourself an avid cinephile? Do you find yourself on a Friday night always at the movie theater? For many peo...
#6 of 27 The Best Disney Names to Give a Dog 195 VOTES Disney has produced some of the most beloved movies of all time. From Snow White and the Seven Dwarfs to Froz...
What All The Character Names In 'The Lion King' Actually Mean 172.8k VIEWS One of the most incredible elements of The Lion King is its breathtaking scenes in the heart of Africa. What's more, all The...

Simba is also found on...