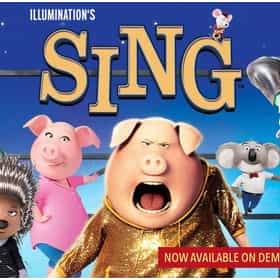 Sing is ranked on...

#86 of 107 The Funniest Movies Starring SNL Cast Members 3.8k VOTES Which comedies starring former SNL cast members are actually funny and worth watching? Since Saturday Night Live debute...
#6 of 63 The Best New Kids Movies of the Last Few Years 103k VOTES If you're looking for the best movies to watch with your kids, this list of new children's films is for you. Featuring the b...
#43 of 100 The Highest-Grossing PG Rated Movies Of All Time 611 VOTES Looking for PG movies that made the most money at the box office? Then you are in the right place, here is a list of the hig...
#52 of 54 The Worst Movies of 2016 10.3k VOTES Action comedies, films based on video games, and melodramatic dramas are all among the worst movies of 2016. The worst movie...
#45 of 52 The Best Scarlett Johansson Movies 19.3k VOTES This list of the best Scarlett Johansson movies is ranked best to worst and includes movie trailers when available. Througho...
#22 of 41 The Best Reese Witherspoon Movies 6k VOTES List of the best Reese Witherspoon movies, ranked best to worst with movie trailers when available. Reese Witherspoon starte...
The Highest Grossing Movies of All Time 90.3k VIEWS The highest grossing movies of all time, here in all their cinematic and box office splendor. These top movies at the box of...