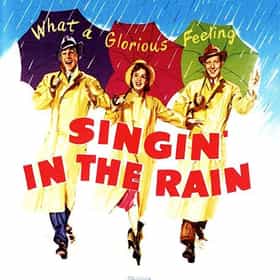 Singin' in the Rain is a 1952 American musical comedy film directed by Gene Kelly and Stanley Donen, starring Kelly, Donald O'Connor and Debbie Reynolds, and choreographed by Kelly and Donen. It offers a lighthearted depiction of Hollywood in the late '20s, with the three stars portraying performers caught up in the transition from silent films to "talkies." The film was only a modest hit when first released, with O'Connor's Best Comedy or Musical Lead Actor win at the Golden Globes, Betty Comden and Adolph Green's win for their screenplay at the Writers Guild of America Awards, and the best supporting actress Oscar nomination for Jean Hagen being the only major recognitions. ... more on Wikipedia

lists about Singin' in the Rain

Every Song in Singin' in the Rain, Ranked by Singability 217 votes Musical fans everywhere know the unforgettable image of Gene Kelly waltzing through the streets of old Hollywood jovially pr...

Singin' in the Rain is ranked on...

Singin' in the Rain is also found on...

Romance Movies and Films List of All Movies Released in 1952