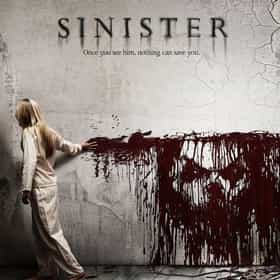 Sinister is a 2012 supernatural horror film directed by Scott Derrickson and written by Derrickson and C. Robert Cargill. It stars Ethan Hawke as fictional true writer Ellison Oswalt who discovers a box of home movies in his attic that puts his family in danger. Sinister premiered at the SXSW festival, and was released in the United States on October 12, 2012, and in the UK on October 5, 2012. A sequel, entitled Sinister 2 has been announced and is scheduled to be released in the United States on 21 August 2015. ... more on Wikipedia

Sinister is ranked on...

Sinister is also found on...