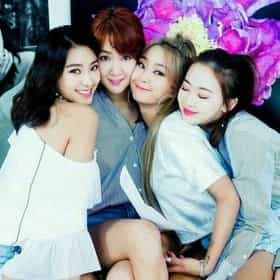 Sistar was a South Korean girl group formed in 2010 by Starship Entertainment. The group consisted of Hyolyn, Bora, Soyou, and Dasom. Their debut studio album So Cool was released on 9 August 2011. Their second album, Give It to Me, was released on 11 June 2013. Their biggest hits include "So Cool", "Alone", "Touch My Body", "Loving U" and "Give It to Me". Their fourth single, "So Cool," debuted at number one at Billboard Korea K-Pop Hot 100 singles chart. In May 2017, Sistar released a teaser photo revealing that they will be making a comeback at the end of May. Their new track titled "Lonely" which was composed by ... more on Wikipedia

SISTAR is ranked on...

#4 of 36 List Of All Disbanded K-pop Girl Groups, Ranked 7.6k VOTES Here is a list of all disbanded K-pop girl groups. Featuring new groups and the best Kpop groups of all time,...
#42 of 63 Cakes Kpop Idols Received from Their Fans 9.3k VOTES So you think you know all about the decorative cakes K-pop stars have received from fans? These are the most decorative and ...
#24 of 171 The Best K-Pop Groups of All Time 2.3M VOTES Here is the Best K-pop Groups list, with photos, ranked best to worst by votes. Make sure to also vote for the best K-pop so...

SISTAR is also found on...