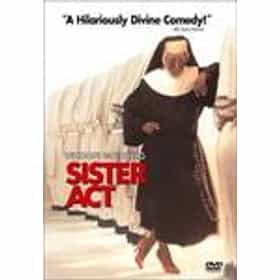 Sister Act is a 1992 American musical comedy film directed by Emile Ardolino and written by Joseph Howard, with musical arrangements by Marc Shaiman. It stars Whoopi Goldberg as a lounge singer forced to join a convent after being placed in a witness protection program. It also features Maggie Smith, Kathy Najimy, Wendy Makkena, Mary Wickes, and Harvey Keitel. Sister Act was one of the most financially successful comedies of the early 1990s, grossing $231 million worldwide. The film spawned a franchise, which consists of a 1993 sequel, Sister Act 2: Back in the Habit, and a musical adaptation, which premiered in 2006. A remake of Sister Act is in the works. On December 7, 2018, it was ... more on Wikipedia

The Funniest Quotes From 'Sister Act' 105 votes The best quotes from Sister Act make you realize how funny the movie really is, even if you haven't seen it in a while. Let'...

Sister Act is ranked on...

Sister Act is also found on...