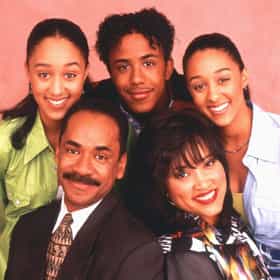 Sister, Sister is an American television sitcom starring identical twins Tia and Tamera Mowry. It aired from 1994 to 1999. The premise of the show was that the girls were separated and adopted at birth. One was adopted by a single mother while the other was adopted by a single father, and the two accidentally found each other fourteen years later and reunited. Created by Kim Bass, Gary Gilbert and Fred Shafferman, the series was produced by de Passe Entertainment and Paramount Network Television. The cast, along with Tia and Tamera Mowry, also featured Jackee Harry as Tia's mother, Tim Reid as Tamera's father, and Marques Houston as their annoying neighbor. RonReaco Lee and Deon ... more on Wikipedia

Where Are They Now: The Cast Of 'Sister, Sister' 5.5k views With rumors of a Sister, Sister reboot regularly resurfacing, the world is caught up remembering the good ol’ days when the ...

Sister, Sister is ranked on...

#1087 of 2,297 The Greatest TV Shows Of All Time 1.5M VOTES Choosing the best TV shows of all time means taking into account the best TV dramas, the best TV comedies, the best cartoons...
#28 of 58 The Greatest Sitcoms of the 1990s, Ranked 107.9k VOTES It’s hard to choose the best sitcoms of the ‘90s: so many quality theme songs, so many outlandish misunderstandings, and so ...
#15 of 84 People who voted for Sister, Sister... Women are 2x more likely to vote for this The Greatest Black Sitcoms of All Time 64.6k VOTES List of the best black sitcoms, past and current. Viewers love these top African-American comedy series for many reasons. Th...
#18 of 157 TV Shows Most Loved by African-Americans 90.9k VOTES This list contains TV shows black people love, whether the shows are current or from the past or contain an all-African-Amer...
#41 of 271 The Best Female-Led TV Shows 25.7k VOTES While society has by no means reached actual equality, in the last few years television viewers have started to see an uptic...
#85 of 1,328 The Best Guilty Pleasure TV Shows 19.7k VOTES List of the best guilty pleasure TV shows, past and present, including sitcoms, dramas, reality shows, and game shows. These...
#7 of 26 The TGIF Shows You Wish Still Existed 59.2k VOTES The original TGIF programming block on ABC was a staple of the 1990s and introduced viewers to some of the best sitcoms of a...
#92 of 195 What Shows Do You Most Want on Netflix Streaming? 195.2k VOTES What TV shows do you most want on Netflix streaming? While Netflix does offer some great streaming TV shows, and will likely...
#31 of 106 The Best Disney Channel TV Shows 203.2k VOTES This list of the top current and cancelled Disney Channel TV series includes the date when each show first aired, as well as...
#17 of 80 The Best WB Television Network TV Shows/Programs 2.9k VOTES For many of us, shows on the WB were responsible for informing our early years, teaching us that love is complicated, your f...
#7 of 34 The Greatest Black Sitcoms of the 1990s 11k VOTES Although black sitcoms have been on television since the earliest days of network syndication, the genre really boomed in th...
#14 of 35 The Best 1990s Teen Shows 13.5k VOTES The '90s are one of the greatest decades in TV history. There was top-tier programming in just about every TV subgenre. Thes...
#11 of 34 The Best 1990s Black TV Shows 2.1k VOTES In the mood to catch up some great shows? These are the best 1990s Black TV shows, ranked from best to worst by user votes. ...
#7 of 40 The Greatest TV Shows About Sisters 747 VOTES What do you think are the best shows about sisters? Many of us have one, but there aren't as many popular TV shows about sis...
#14 of 39 The Greatest TV Shows About Growing Up 492 VOTES We all did it (or are doing it): growing up is simply a part of life so it should come as no surprise many TV shows are abou...