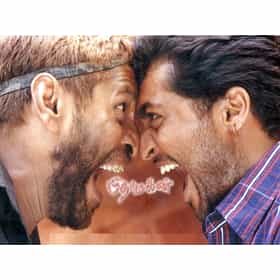 Pithamagan is a 2003 Indian Tamil drama film written and directed by Bala. The film stars Vikram, Suriya, Laila and Sangeetha in the lead and Simran making a pivotal cameo as herself. Produced by V. A. Durai, the film is cinematographed by Balasubramaniem, lyrics are by Vaali, Pazhani Barathi and Na. Muthukumar, dance has been choreographed by Brinda, editing by Suresh Ars, fights by Stunt Siva and art direction by A. C. Pillai. The film's score and soundtrack are composed by Ilayaraaja. The film plot is based on Jayakanthan's Nandhavanathil Oru Andi, the story of an undertaker. Upon release, the film met with critical acclaim and Vikram won the National Film Award for Best Actor for ... more on Wikipedia

Sivaputrudu is also found on...