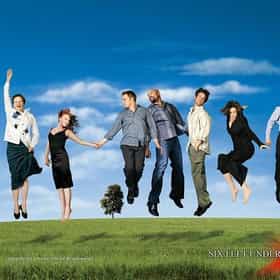 Six Feet Under is an American drama television series created and produced by Alan Ball. It premiered on the premium cable network HBO in the United States on June 3, 2001, and ended on August 21, 2005, spanning five seasons and 63 episodes. The show was produced by Actual Size Films and The Greenblatt/Janollari Studio and was shot on location in Los Angeles and in Hollywood studios. The show depicts members of the Fisher family and their friends and lovers. The series traces these characters' lives over the course of five years. ... more on Wikipedia

Six Feet Under is ranked on...

#53 of 92 The Best Dramedy TV Series 14.7k VOTES Some shows are clearly dramas or sitcoms. Clearly. Because those are two genres that exist. Everyone agrees that they exist....
#22 of 219 The TV Shows with the Best Writing 67.1k VOTES What are the best written TV shows of all time? The Writers Guild of America (WGA) and TV Guide recently compiled its list o...
#16 of 134 The Best of Premium Cable TV Series 188.2k VOTES Best cable series on premium cable includes some of the greatest TV shows in history. This list of premium cable original pr...
#27 of 253 The Greatest TV Dramas of All Time 158.6k VOTES The greatest TV dramas of all time are the ones that make you feel connected to characters you will never meet in real life ...
#94 of 147 The Greatest TV Title Sequences Ever 43k VOTES The greatest TV title sequences of all time are those memorable opening credits scenes from many of the best TV shows of all...
#315 of 594 The Best TV Theme Songs of All Time 319.1k VOTES The best TV theme songs and TV intros of all time will take you back to some of the greatest moments in TV. Television theme...
#56 of 385 People who voted for Six Feet Under... People Age 30 to 49 are 2x more likely to vote for this also upvote The Godfather Franchise on The Best Movies of All Time The Best TV Shows of The Last 20 Years 1.5M VOTES This best TV show list represents the combined opinions of thousands of TV fans. Anyone can vote on this list of the best TV...
#67 of 168 The TV Shows Most Loved by Hipsters 28.5k VOTES List of TV shows hipsters love, currently running and from the past. Perhaps a TV-watching hipster seems like an oxymoron; a...
#67 of 114 The Best Shows About Families 13.7k VOTES The best shows about families are those sitcoms and family shows that give us a break from our own families and give us a pe...
#130 of 154 People who voted for Six Feet Under... People on the West Coast are 3x more likely to vote for this The All-Time Greatest TV Pilots 230.5k VOTES The greatest TV pilots of all-time are single episodes of television that introduced us to what would soon be iconic charact...
#49 of 50 What to Watch If You Love 'Ray Donovan' 170 VOTES Wondering what to watch after Ray Donovan? If seasons of intense drama about fixing the crimes of powerful people in this se...
#8 of 24 What to Watch If You Love Donnie Darko 359 VOTES What are some shows like Donnie Darko? That’s a tough one, because if you think about it, Donnie Darko is a really unusual m...
#15 of 42 What to Watch If You Love 'Veep' 71 VOTES Veep is a political satire that garnered the love and affection of hordes of fans, but if you’ve finished watching the serie...
#13 of 30 What to Watch If You Love 'Real Time with Bill Maher' 72 VOTES Real Time with Bill Maher is a comedy interview series that tackles the most controversial topics of the day. If you’re...
#16 of 109 The Best TV Shows On Amazon Prime 36.9k VOTES The best streaming Amazon Prime TV shows and television series feature many of the most memorable TV characters of all time ...
#56 of 476 The Best Television Shows of the 2000s 144.9k VOTES Some great TV shows came out of the 2000s, while some have even lived on. Here's a list of the best shows that aired from 20...
#25 of 67 The Best Drama Shows On Amazon Prime 2.6k VOTES Shows come and go from Amazon Prime all the time, but there's always a great list of drama series to choose from. Whether it...
#20 of 108 The Best TV Shows Set In L.A. 1.9k VOTES Los Angeles, California is not only where most television series are filmed, but it also tends to be where they're set as we...
#26 of 53 Great TV Shows That Are Totally Surreal And Bizarre 3.7k VOTES Surrealist TV shows keep viewers tuning in week after week by combining supernatural elements with everyday dramas. The best...
#17 of 37 The Best TV Shows That Deal with Grief 308 VOTES Grief can often be an all-consuming feeling that makes you feel all alone in the world. But the fact is, nearly everyone has...
#9 of 45 The Best Drama Shows About Families, Ranked 1.7k VOTES Backstabbing, lies, and cheating - there's nothing quite like family. These issues, and more, are at the heart of good drama...
#5 of 41 The Best HBO Series of the 2000s 1.4k VOTES These are the best 2000s HBO series, ranked by user votes. Throughout the 2000s, HBO released award-winning programs in just...
#31 of 46 The Best Serial Drama TV Shows 1.4k VOTES It's no secret America loves drama. Which shows that include over-the-top scenarios and intense characters are the best of t...
#16 of 21 The Best 2000s Dark Comedy TV Shows 237 VOTES These are the best 2000s dark comedy TV shows, ranked from best to worst by user votes. From top 2000s dark comedy series th...

Six Feet Under is also found on...