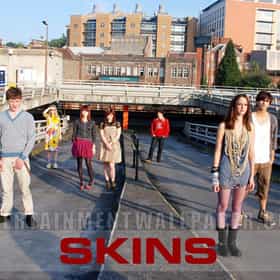 Skins is a British teen comedy-drama television series that follows the lives of a group of teenagers in Bristol, South West England, through the two years of sixth form. Its controversial story-lines have explored issues like dysfunctional families, mental illness (such as depression, eating disorders, post-traumatic stress disorder and bipolar disorder), adolescent sexuality, gender, substance abuse, Autism spectrum disorder, death, and bullying. Each episode generally focuses on a particular character and the struggles he or she faces in his or her life and the episodes are named after the featured character. The show was created by father-and-son television writers Bryan Elsley and ... more on Wikipedia

Skins is ranked on...

#58 of 169 People who voted for Skins... People outside of the US are 3x more likely to vote for this The TV Shows Most Loved by Hipsters 29k VOTES List of TV shows hipsters love, currently running and from the past. Perhaps a TV-watching hipster seems like an oxymoron; a...
#13 of 17 19 TV Shows That Launched A Cast's Worth Of Careers 1k VOTES Before they were famous, they were an ensemble: these popular TV shows had more than just a handful of future A-listers. In ...
#489 of 1,328 The Best Guilty Pleasure TV Shows 19.7k VOTES List of the best guilty pleasure TV shows, past and present, including sitcoms, dramas, reality shows, and game shows. These...
#4 of 26 What to Watch If You Love 13 Reasons Why 559 VOTES Are you trying to decide what to watch after 13 Reasons Why? That’s understandable. After all, you no doubt want to try and ...
#62 of 80 The Best Teen Shows of the 2010s 30.7k VOTES A huge demographic that TV shows need to reach out to is young adults. Teens love TV. What they love even more is TV targete...
#65 of 350 The Best Streaming Netflix TV Shows 5.3M VOTES The best streaming Netflix TV shows include some great television dramas, sci-fi/adventure shows, sitcoms, and reality TV pr...
#20 of 42 The Best 2000s Teen Shows 16.3k VOTES These are the best 2000s teen shows, ranked from best to worst by young adult TV show fans all over the world. Some of these...
#34 of 38 The Best British TV Comedies On Netflix 4.3k VOTES Here are the best British comedy shows streaming now on Netflix. Whether you're looking for British sitcoms or shows with dr...
#22 of 50 The Best LGBTQ+ Shows & Movies of All Time 3.5k VOTES One of the least-represented groups in the population to be seen in film and television have been the LGBTQ+ community. For ...
#28 of 40 The Greatest TV Shows About Sisters 747 VOTES What do you think are the best shows about sisters? Many of us have one, but there aren't as many popular TV shows about sis...
#1 of 42 The Best British Teen Dramas Ever Made 697 VOTES British dramas might be some of the most compelling shows on either side of the pond. The popularity of British television d...
#33 of 45 The Greatest TV Shows About Best Friends 1.8k VOTES Everyone's got at least one of them and that's why we love to watch TV shows about best friends. Whether you're talking abou...
#14 of 32 The Best Teen Dramedy TV Shows, Ranked 2k VOTES Humor and high school conflicts combine to make teen dramedies binge-worthy television. The best teen dramedy shows featur...

Skins is also found on...