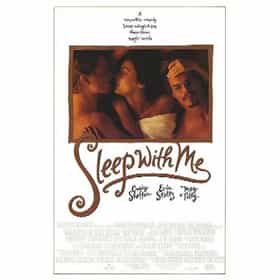 Sleep With Me is a 1994 American romantic comedy film directed by Rory Kelly and starring Meg Tilly, Eric Stoltz and Craig Sheffer, who play good friends that become involved in a love triangle, a relationship complicated by the marriage of Tilly's and Stoltz's characters. It also features Parker Posey, Joey Lauren Adams and a cameo by Quentin Tarantino, in which he expounds on the homoerotic subtext of Top Gun to Todd Field. Six different writers wrote a scene each about the arc and development of the relation between the protagonists, including Kelly himself. The film was screened in the Un Certain Regard section at the 1994 Cannes Film Festival. ... more on Wikipedia

Sleep with Me is ranked on...

Sleep with Me is also found on...