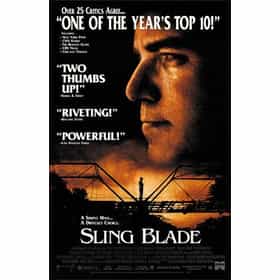 Sling Blade is a 1996 American drama film set in rural Arkansas, written and directed by Billy Bob Thornton, who also stars in the lead role. It tells the story of a man named Karl Childers with a developmental disability who is released from a psychiatric hospital and the friendship he develops with a young boy. In addition to Thornton, it stars Dwight Yoakam, J. T. Walsh, John Ritter, Lucas Black, Natalie Canerday, James Hampton, and Robert Duvall. ... more on Wikipedia

Sling Blade is ranked on...

Sling Blade is also found on...