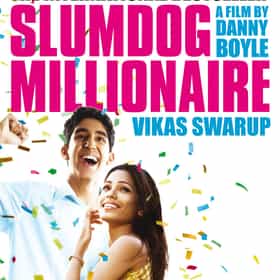 Slumdog Millionaire is a 2009 British drama film directed by Danny Boyle, written by Simon Beaufoy, and produced by Christian Colson. It was co-directed in India by Loveleen Tandan. It is an adaptation of the novel Q & A by Indian author and diplomat Vikas Swarup. Set and filmed in India, the film tells the story of Jamal Malik, a young man from the Juhu slums of Mumbai who appears on the Indian version of Who Wants to Be a Millionaire? and exceeds people's expectations, thereby arousing the suspicions of cheating; Jamal recounts in flashback how he knows the answer to each question, each one linked to a key event in his life. After its world premiere at Telluride Film Festival and ... more on Wikipedia

Slumdog Millionaire is ranked on...

Slumdog Millionaire is also found on...