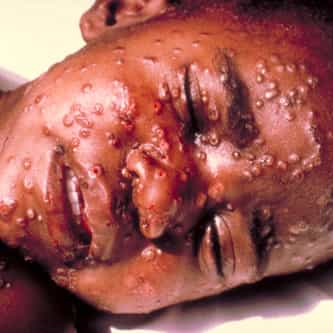 Smallpox was an infectious disease caused by either of two virus variants, Variola major and Variola minor. The disease is also known by the Latin names Variola or Variola vera, derived from varius or varus. The disease was originally known in English as the "pox" or "red plague"; the term "smallpox" was first used in Britain in the 15th century to distinguish variola from the "great pox". The last naturally occurring case of smallpox was diagnosed ... more on Wikipedia

49.5k readers Smallpox Could Possibly Make A Comeback - But What Exactly Is It?

Smallpox IS LISTED ON

#318 of 659
288.9k VOTES The Scariest Threats to the United States
#13 of 15
7.8k VOTES Events In American History Our Teachers Never Taught Us About
#3 of 20
23.9k VOTES The Most Significant Historical Events That Our History Teachers Didn’t Tell Us About
#4 of 15
10.2k VOTES The Scariest Biological Weapons in History
#6 of 73
19.8k VOTES The Scariest Diseases of All Time People who voted for Smallpox on this list also upvote James Bond Franchise on Every James Bond Movie, Ranked Best to Worst
129.2k VIEWS All The Afflictions You Might Have If You Lived In A Medieval City
99k VIEWS The 7 Pandemics That Shaped The Modern World
770.6k VIEWS The 13 Scariest Viruses on Earth Today
6.5k VIEWS Everything People Have "Diagnosed" Abe Lincoln With
3.1k VIEWS How Long Do These Diseases And Viruses Live In Your Body After You Die?
List of Common Diseases: Most Common Illnesses