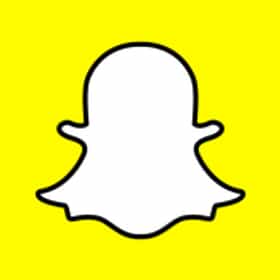 Snapchat is a photo messaging application developed by Evan Spiegel, Bobby Murphy, and Reggie Brown, then Stanford University students. Using the application, users can take photos, record videos, add text and drawings, and send them to a controlled list of recipients. These sent photographs and videos are known as "Snaps". Users set a time limit for how long recipients can view their Snaps, after which they will be hidden from the recipient's device and deleted from Snapchat's servers. According to Snapchat in May 2014, the app's users were sending 700 million photos and videos per day, while Snapchat Stories content was being viewed 500 million times per day. The company ... more on Wikipedia

Chris Pine
24 Epic Snapchat Insults 39.1k votes If you use the photo-messaging app Snapchat, you know how fun it can be to send a photo with a funny caption or drawing on i...
The Most Annoying Photos Of Rich Kids On Snapchat 856.8k votes Private Jets. Cases of Dom. Designer Duds. Yachts and mansions. Rich kids really are different from you and me, and they LOV...
50 Art History Snapchats You Need in Your Life Right Now 21.5k votes Have you ever found yourself at the museum with your art-loving friends and felt like you were the only one who just didn’...
Snapchats from Your Dog 39.5k votes Do you ever feel like your dog is trying to tell you something, but is having trouble effectively communicating his message?...
10 People Who Posted About Their Own Deaths On Snapchat 902.1k views The popular social media app Snapchat is used every day by millions of people around the world to share videos and photograp...
Hilarious Snapchats From The Morning After 176.9k votes There are so many uses for Snapchat, and not all of them are good ideas. Sure, now that you can send cash back and forth, th...
Snapchats from Your Cat 6.3k votes As anyone who has ever lived with a cat already knows, kitties don’t let their limited vocabulary get in the way of expressi...
The Greatest Snapchats Sent During Class 264.5k votes Admit it: you Snapchat during class. We don't blame you. When you're in the middle of a lecture, there will inevitably come ...
29 Snapchatters Who Turned Around a Boring Day at the Mall 503.8k views Do you see the humor in things that other people miss? Then this collection of Snapchat masterpieces will show you how you c...
Funny Snapchat Drawings That Put Your Art Skills to Shame 5.3k votes Do you sometimes feel like nothing very text-worthy ever happens in your life? Does your smart phone’s photo gallery look mo...
28 Celebrities You Can Follow on Snapchat 60k views Snapchat isn't just for sending dirty photos to that special someone, or for creating hilarious picture-inspired jokes. Sinc...
The Best And Punniest Puns Ever Snapchatted 27.8k votes Is there a more fitting style of comedy for Snapchat than the pun? We think not. The pun is the perfect piece of laugh candy...
The Best Snapchat Pickup Lines 57k votes You know how it goes - start talking someone up, then think to yourself, "I think I might actually have a shot." T...
The Trashiest Posts in Snapchat History 1.7M views You know how some things just seem to go together, such as ketchup and french fries, peanut butter and jelly, or apples and ...
Things You Didn't Know About Snapchat Founder Evan Spiegel 11k views The world knows Evan Spiegel as the co-founder of Snap, Inc. - formerly known as Snapchat - one of the most explosive social...
Hilarious Snapchats Of Wild Kids In Their Natural Habitat 981 votes Maybe the greatest gift the Internet has given us - besides a never ending supply of funny pictures of pet disasters - is th...

Snapchat is ranked on...

#13 of 82 The Top Must-Have Indispensable Mobile Apps 17k VOTES The most indispensable mobile apps are those that, for whatever reason, people just can't seem to function without. These ar...
#40 of 349 Popular Things You're Just Not Interested In 187.7k VOTES Face it, when it comes to solid taste, majority doesn't always rule. It's time to take a good long look at popular thin...
#3 of 19 The Best Photo Apps 362 VOTES This list of the best photo apps for your smartphone include apps for both the iPhone and Android phones. If you’re into pho...
#5 of 78 The Best iPhone Apps, Ranked 14.4k VOTES What are the best iPhone apps? The best apps for iPhone include programs that help us be more efficient, but some are just t...
#27 of 43 The 40+ Best Companies To Work For By The Beach in Southern California 288 VOTES If you have dreams of working by the beaches in Southern California, you're probably wondering where you can make that dream...
All The Things China Has Banned In The Past 100 Years 42.9k VIEWS Given the country's been under a strict Communist regime since the 1940s, it's no surprise China is home to some pretty stra...