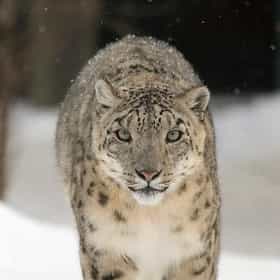 The snow leopard (Panthera uncia), also known as the ounce, is a large cat native to the mountain ranges of Central and South Asia. It is listed as Vulnerable on the IUCN Red List because the global population is estimated to number less than 10,000 mature individuals and decline about 10% until 2040. It is threatened by poaching and habitat destruction following infrastructural developments. It inhabits alpine and subalpine zones at elevations from 3,000 to 4,500 m (9,800 to 14,800 ft), ranging from eastern Afghanistan to Mongolia and western China. In the northern range countries, it also occurs at lower elevations.Taxonomically, the snow leopard was long classified in the monotypic ... more on Wikipedia

Snow Leopard is ranked on...

#15 of 91 The Best of Awwducational: Fun Facts About Adorable Animals 22.5k VOTES Animal facts! Cute gifs and photos! Get 'em while they're hot! Are you subscribed to /r/awwducational? This subreddit p...
#10 of 214 The World's Most Beautiful Animals 166.7k VOTES What are the world's most beautiful animals? This list includes some of the most stunning, exotic, and truly gorgeous animal...
#7 of 27 The Most Charismatic Megafauna 1.4k VOTES Megafauna. Charismatic megafauna. What are they even? They are elephants and pandas and lots of other popular animals that p...

extinct tiger species, any new cartoon, brightest star in the sky, beaks of birds with names, best 3b of all time, top 10 childhood illnesses, dangerous animals in texas, types of vampires, beatles cartoon ticket to ride, a thousand clowns quotes