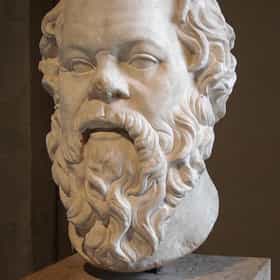 Socrates (; Ancient Greek: Σωκρᾰ́της, romanized: Sōkrátēs, [sɔːkrátɛːs]; c. 470 – 399 BC) was a classical Greek (Athenian) philosopher credited as one of the founders of Western philosophy, and as being the first moral philosopher of the Western ethical tradition of thought. An enigmatic figure, he made no writings, and is known chiefly through the accounts of classical writers writing after his lifetime, particularly his students Plato and Xenophon. Other sources include the contemporaneous Antisthenes, Aristippus, and Aeschines of Sphettos. Aristophanes, a playwright, is the main contemporary author to have written plays mentioning Socrates during Socrates' lifetime, ... more on Wikipedia

The Best Socrates Quotes 10.4k votes Wisdom will be yours with this list of the best Socrates quotes. This list is arranged by which famous Socrates quotes have ...
The Best Books About Socrates 166 votes List of best books about Socrates, including jacket cover images when available. All these popular books on Socrates are sor...

Socrates is ranked on...

#5 of 2,830 The Most Influential People of All Time 2.4M VOTES This is a list of the most influential people of all of human history. This means that the individuals on this list have had...
#103 of 376 The Most Important Leaders In World History 949.3k VOTES For good or for bad, our leaders can be powerful forces for change in the world. But who are the most impaction people to ev...
#17 of 469 Famous Role Models We'd Like to Meet In Person 539k VOTES These are the famous folks it would be most exciting to meet in person, as ranked by the wisdom of the crowd. Some of the be...
Famous Poisoning Deaths 210.9k VIEWS The list of famous people who died of poisoning includes all the notable people who met their end at the hands of a poison. ...
Famous People With Epilepsy 447.9k VIEWS List of famous people with epilepsy, loosely ranked by fame and popularity. Epilepsy is a common set of neurological disorde...

Socrates is also found on...