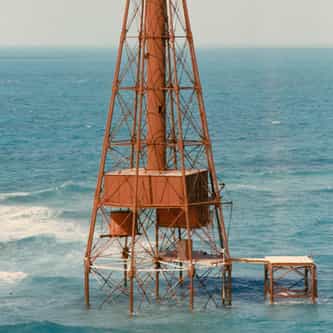 Sombrero Key Light is located near Key Vaca in Marathon, Florida. The lighthouse is located on a mostly submerged reef. The name Sombrero Key goes back to the Spanish, and old charts show a small island at the spot, but by the later 19th Century the island had eroded away, with some parts of the reef exposed at low tide. As a result, the reef and the lighthouse have also been called Dry Banks. The lighthouse was put in service in 1858, automated in 1960, and is still in operation. The ... more on Wikipedia

Sombrero Key Light IS LISTED ON