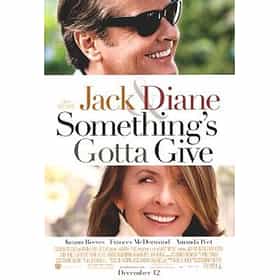 Something's Gotta Give is a 2003 American romantic comedy film written, produced and directed by Nancy Meyers for Columbia Pictures and Warner Bros. Pictures. It stars Jack Nicholson and Diane Keaton as a successful 60-something and 50-something, who find love for each other in later life, despite being complete opposites. Keanu Reeves and Amanda Peet co-star, with Frances McDormand, Paul Michael Glaser, Jon Favreau, and KaDee Strickland playing key supporting roles. The film received generally favorable reviews and was a box-office hit following its North American release, eventually grossing US$266,600,000 worldwide, mostly from its international run. For her performance Keaton ... more on Wikipedia

Something's Gotta Give is ranked on...

#32 of 243 Critically Acclaimed Movies That Kinda Suck 106.9k VOTES List of supposedly great films that actually kind of suck. This list includes films that have won or been nominated for Osca...
#147 of 803 The Greatest Chick Flicks Ever Made 421.3k VOTES Here's a list of the greatest chick flicks ever, ranked by fans and casual critics like you. The best girl movies are those ...
#68 of 240 The Best Movies for Women 31.5k VOTES The films on this list of the best movies for women have been ranked as the absolute best. From wedding movies to rom-coms, ...
#5 of 15 Seemingly Happy Movie Endings With Unhappy Consequences 5.6k VOTES Unless you’re a glutton for punishment who spends your days watching joyless films like Martyrs or Dancer in the Dark, you l...
#12 of 15 The Objectively Worst Decisions In Rom-Com History 345 VOTES Romantic comedies are usually meant for little more than silly fun and entertainment. Nevertheless, most of us still wo...
#2 of 24 The Best Movies About a Midlife Crisis in Women 9.2k VOTES Midlife crises aren't just for men anymore. In fact, some of the best films featuring people re-examining their life choic...
#1 of 53 The Best Movies About Older People Falling in Love, Ranked 19.9k VOTES Middle age romance between older people in the movies can often be richer than young love. Adult couples have had more time ...
#3 of 14 The Best Movie Kitchens Of All Time 355 VOTES The magic of cinema allows moviegoers to escape their reality and take a vacation in someone else's for two hours or so. Thi...
#8 of 15 Movie Couples With Creepy Age Gaps 15.2k VOTES In the world of motion pictures, movie couples with creepy age gaps can usually overcome any issue posed by the&nb...
#52 of 380 People who voted for Something's Gotta Give... People under 30 are 3x more likely to vote for this The Greatest Romantic Comedies of All Time 195.2k VOTES Romantic comedy is one of the oldest and most popular film genres of all time. The term "romantic comedy" can refe...
#28 of 390 The Best Movies Directed by Women 31.7k VOTES It’s no longer just a man’s world out there, women have been taking over Hollywood for years in some pretty big ways and the...
#40 of 95 The Best Romantic Comedies Rated PG-13 7.5k VOTES List of PG-13 romantic comedies, ranked from best to worst with movie trailers when available. Many good romantic comedies a...
#22 of 92 The Best Movies About Marriage 3.4k VOTES Marriage is hard; spending all of your waking time with the same person, day after day can be exhausting. But at the same ti...
#326 of 530 The Best Doctor Movies 3.4k VOTES A complete list of all doctor movies, including films about medicine, medical discoveries and the lives of doctors & nur...
#3 of 43 The Best Amanda Peet Movies 729 VOTES List of the best Amanda Peet movies, ranked best to worst with movie trailers when available. Amanda Peet's highest grossing...
#30 of 39 The Best Frances McDormand Movies 706 VOTES List of the best Frances McDormand movies, ranked best to worst with movie trailers when available. Frances McDormand's high...
#1 of 49 The Best Romance Movies of 2003 495 VOTES List of the best 2003 romance movies, ranked by how many upvotes they've received by other fans of the genre. If watching me...
#2 of 10 The Best Movies About Dating In Your 60s 10 VOTES When you're young, it's easy to believe that older folks don't date. But if that were true there wouldn't be movies about da...

Something's Gotta Give is also found on...