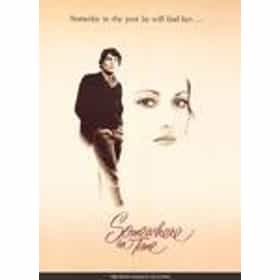 Somewhere in Time is a 1980 romantic fantasy film directed by Jeannot Szwarc. It is a film adaptation of the 1975 novel Bid Time Return by Richard Matheson, who also wrote the screenplay. The film stars Christopher Reeve, Jane Seymour, and Christopher Plummer. Reeve plays Richard Collier, a playwright who becomes smitten by a photograph of a young woman at the Grand Hotel. Through self-hypnosis, he travels back in time to the year 1912 to find love with actress Elise McKenna. However, this relationship may not last as long as the two of them think; Elise's manager, William Fawcett Robinson, fears that romance will derail her career and resolves to stop him. The film is known for its ... more on Wikipedia

Somewhere in Time is ranked on...

Somewhere in Time is also found on...