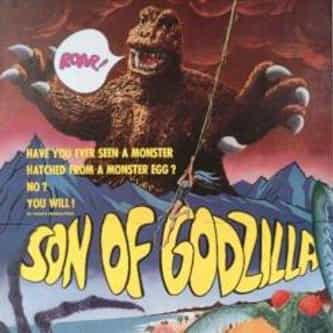 Son of Godzilla, is a 1967 Japanese science fiction kaiju film produced by Toho. Directed by Jun Fukuda with special effects by Sadamasa Arikawa, the film starred Tadao Takashima, Akira Kubo, and Akihiko Hirata. The eighth film in the Godzilla series, it was also the second of two island-themed Godzilla adventures that Toho produced with slightly smaller budgets than most of the Godzilla films from this time period. Continuing the trend of shifting the series towards younger audiences, the ... more on Wikipedia

Son of Godzilla IS LISTED ON